The architecture of Hertfordshire’s ‘Metro-land’ of homes built during the railway boom of the 1930’s has been inspiration for many, including poet John Betjeman who reveled in their construction. Now, nearly ninety years later, we have more reasons to highlight and discuss the county’s property market.

House price figures from the Land Registry reveal that property prices are rising by 6.5% per year in Hertfordshire which, with the exception of Greater London, is the highest figure within any county in the UK. As a result of the increase, Hertfordshire has overtaken counties such as Surrey (6.2%) in terms of the rate of price growth, which traditionally held pole position as the fastest-rising county outside of London.

There are several key reasons for the county’s performance. One of the most prominent factors for the rise in property prices is due to the imbalance in demand for property; demand for homes in Hertfordshire is rising fast while supply remains flat. Created mostly by increasing demand at the bottom rung of the market from first time buyers and investors looking for apartments and starter homes, this is a situation affecting much of the UK at the moment and one of the reasons a property search consultant is indispensable.

With this in mind, Londoners eyeing a larger home away from urban London may look to do so for a seemingly better quality of life. With a quick commute in to the city being a high priority, those looking in Hertfordshire are somewhat are spoilt for choice. The desirable towns include Hitchin, Hertford North, Welwyn Garden City and Hatfield on the East Coast Mainline train link. Whilst on the West Coast Mainline, Watford Junction is becoming increasingly popular and the Midland Main Line stops at Radlett, St Albans and Harpenden.

Alongside those looking out of London for larger properties at a lesser cost, both the current and planned improvements to the Mainline train networks are also already boosting demand for Hertfordshire property. The Anglia Line, which has several stations in Hertfordshire including Cheshunt and Hertford East, had £164 million spent on improvements to its services at the end of last year, latest figures from Network Rail reveal.

The most high profile planned works are those of the planned £16 billion Crossrail 2 project which will link parts of Hertfordshire with Surrey via a cross-London link. This will make commuting to work within the city even more accessible than it currently is and thus many are already looking to what options lie outside of London for them.

If you would like to know more about the Hertfordshire property market, get in touch with Garrington to learn more about how they can assist. 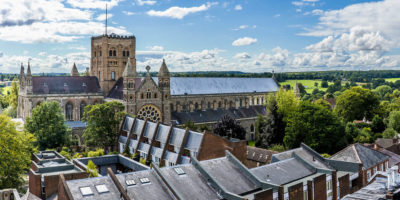 Building your dream home in Kent